Yesterday was our 19th wedding anniversary. In honor of the occasion, I am re-posting the story of our wedding that I wrote last year.

Once upon a time, in the kingdom of San Antonio, there lived a curly-headed princess.  (Well, she was actually a soldier, but the story is much more romantic if she is a princess.)  She fell in love with a kind, handsome prince. (You guessed it, he was a soldier too.)  They fell in love and wanted to share their lives together, but were in no hurry to make things legal.

Then one day a ferocious dragon attacked.  (She got orders to go to Fort Drum.)  The prince and princess knew that only the power of true love could save them, so they decided it was time to get married.

On the day the marriage was to take place they ventured out in the midst of a powerful thunderstorm in search of a justice of the peace.  They finally found the JP in a converted jail house. So, in the midst of a raging storm, while standing in a former jail, the prince and princess exchanged their vows. (The wise JP included a wonderful clause in the prince’s vows.  He had to promise to bring the princess presents even when it wasn't a holiday.)  Once the vows were said the dragon was slain and they went off to Fort Drum together.

They went on to have many wonderful adventures and have enjoyed living their unconventional fairy tale ever since.  Their happily-ever-after is still continuing. 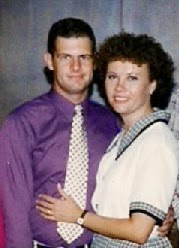 In the nineteen years since that stormy day we have had many ups and downs and many great adventures. We are quite a bit older, but he is still my Prince Charming.
Posted by Barcy at August 03, 2014