This past week-end was the second Texas Comic Fest that hubby and I have produced.   After ten months of hard work the payoff was an amazing day of comic related fun.  Here are a few of my favorite moments.
There were several people who were experiencing their first comic con event. It was so much fun to see them take it all in. I think some of them really found their tribe!  They came in a little shy, maybe a little hesitant, but by the end of the day they were completely at home.   The best first-timers were actually some unintentional attendees.  See, the venue we were at frequently hosts gun shows. We had two different groups of people pay their admission, walk the floor for a bit, then come back to the door and say “This isn’t the gun show, is it?”  I can only imagine what was going on in their heads as they walked around seeing people in cosplay and wondering what the heck kind of gun show this was.
Another favorite moment was when a cosplayer dressed as Deadpool threw a taco at me.  I have been to a lot of comic cons, but I have never had food thrown at me before.  He threw a packet of taco sauce as well, so that was kind of thoughtful.  Taco wasn’t bad tasting either. 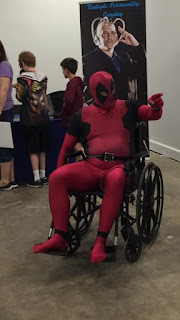 Taco throwing must have exhausted Deadpool. After the taco throwing he stole Professor X's chair.
Kids are always the best part of any event. There were a few adorable youngsters that had seen a Joker cosplayers and promptly went to find Batman and let him know. Batman played right along and said that Joker had escaped from Arkham and thanked the kids for their assistance in finding him. 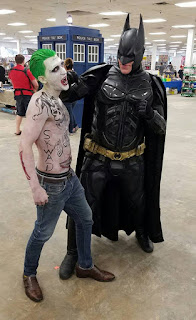 The Joker (Alex Thomas) and Batman (Dan Madsen)
I also had a chance to get to know some very special people.  Bustin’ for Autism was at the event to support autism awareness and raise funds for their mission.  Former WWE wrestler Gene Snitsky was there supporting them. For someone who played a wrestling character that was downright evil, Gene is the sweetest person you would ever want to meet. Such a great guy supporting a fantastic organization!
Another very special person I met was of the four legged variety. Tugg is a canine superhero! He was an abused pup, but he was adopted by a wonderful family that nursed him back to health and trained him to be a therapy dog.  Tugg does charity work and even has his own comic book! Such a powerful example of what love can do. You can learn more about Tugg at his website TuggTheBullTerrier.com 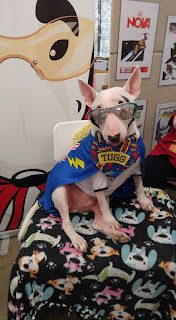 Tugg the Bull Terrier Puppy
Note:  All photos are used courtesy of the Texas Comic Fest Facebook page.
Posted by Barcy at May 18, 2016 No comments: