It Is A Good Week To Be A Geek

I haven’t always been a geek, but I married a geek. When that happens you either resolve yourself to lots of time alone, or you embrace it and go with the flow.  I am now happily going to Comic Cons, watching sci-fi shows, and even reading the occasional comic book. 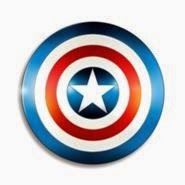 Image via
This has been the best week to embrace my new found passions.  We went to see Captain America: The Winter Soldier Sunday night.  It was so good!  Hubby has been a huge Captain America fan since he was old enough to read the comics, and even he approved.  I highly recommend it, whether you usually like superhero movies or not.
Since we were at the movies Sunday night we DVR’d Game of Thrones and watched it on Monday night. I really like where they are taking some of the characters.  I know that GoT sometimes gets a bad rap because of the way that women are depicted, but it is not true across the board.  It also has some incredibly fierce female characters (hello, Brienne).  I really enjoy female characters that are tough and don’t need anybody to take care of them. Daenerys Targaryen is not only a queen, she is the best ruler on the show (not to mention being the Mother of Dragons).  Little Arya Stark has been growing into a force to be reckoned with for awhile, and this episode was really a turning point for her.
This brings us up to Tuesday and a new episode of Marvel’s Agents of S.H.I.E.L.D.   From everything that has been teased about this episode it should be incredible. They will be dealing with the events that happened in the Captain America movie and I am really intrigued with how they are trying the whole Marvel universe together.
So, that is how my geek week is shaping up so far.  Anybody have any fun plans for the week?
Posted by Barcy at April 08, 2014