I have never really been that into Valentine’s Day.  It has always seemed to be a bit of a made up holiday and if I’m going to get lovey-dovey cards and presents from someone I want it to be because they are feeling it, not because Hallmark told them they had to.  So, hubby has always gotten off easy.
Since I don’t have any grand Valentine’s Day stories to share with you, I wanted to tell you about the most romantic thing my hubby has ever done for me.  It wasn't on Valentine’s Day, it was on an incredibly cold & snow Monday in upstate New York.  Before we begin, let me set the stage…
The hubby and I met while we were both in the army.  Shortly after we were married we were transferred to Fort Drum.  If you aren't familiar with it, Fort Drum is the home of the 10th Mountain Division and is located about 30 miles from the Canadian border.  I am a native Texas, so it is no stretch to say that I was woefully unprepared for months on end of snow and sub-freezing temperatures. It seemed like the sun never shined. It was always gray outside and my mood matched the weather.
One incredibly cold Monday afternoon in January my hubby came home with a dozen yellow roses in his arms.  It wasn't my birthday, it wasn't our anniversary, it wasn't any special occasion whatsoever. He had stopped by the florist because he wanted to bring me some flowers, and he said that when he saw the yellow roses he thought that they would bring me some sunshine and that they would remind me of Texas.
That day was over 15 years ago, but I still get a little misty eyed when I think about it.  He has brought home flowers many times since then (he is a big fan of “just because” flowers), but I still think that bringing me home sunshine in the midst of the worst winter I had ever known was the most incredibly sweet & romantic gesture of all time. 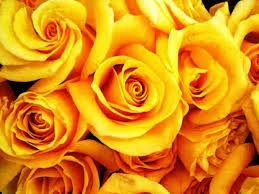 Happy Valentine's Day!  Please feel free to share your romance stories in the comments.  I'd love to hear about them!
Posted by Barcy at February 14, 2014