I was always extremely close to my grandmother.  I was named after her and me & my mom even lived with her for a while when I was young. When she passed away I was heartbroken, but I resolved that I would find a way to keep her spirit alive.


Grandma was an excellent cook. She was not formally trained and she never used cookbooks.  She learned out of necessity.  She had eight kids and lived on a ranch. There was never much money, so she had to be clever to find ways to keep everyone’s bellies full and satisfied. Regardless of how good the rest of her cooking was, she was always known for her pies. As long as she had some flour and some Crisco she could make a pie out of just about anything.  Her pies were always so delicious, but she swore there was no secret ingredient.


I decided that the best way to keep her spirit alive was to take over the mantle of “Barcy the pie-maker”. I knew better than to try and master everything she could do, so I decided that I would just concentrate on apple pie.  My first few efforts were pretty horrible.  I never did master her way of making crusts, but once I switched to a butter crust and started using my food processor I learned to make a pretty decent crust. I pride myself on never using canned apple pie filling.  I always use at least two varieties of real apples & lots of cinnamon.


However, the most important thing in my kitchen when I make a pie is a framed picture of Grandma. I always set her picture on the counter and have a nice little conversation while I’m peeling apples and rolling out dough. Maybe it is all in my head, but I swear I can feel her there. 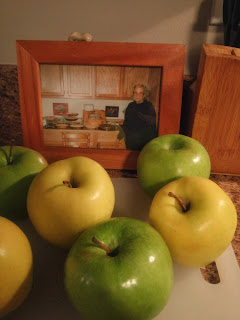 Prepping for pie making with Grandma


My grandma will always live on in my heart. Through making pies with her memory, I have finally figured out the secret ingredient.  It should have been obvious the whole time. Grandma always added lots of love. 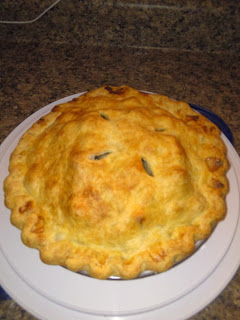 The finished product
Posted by Barcy at December 02, 2013